Old Sarum archaeologists reveal plan of medieval city. Old Sarum Salisbury Wiltshire Revealed at last. The inner and outer baileys of the Old Sarum Iron Age fort were surveyed detailed plan of a medieval city has been produced by experts without any digging at the site.

The results include a series of large structures, possibly defences, with open areas of ground behind possibly for mustering resources or people. 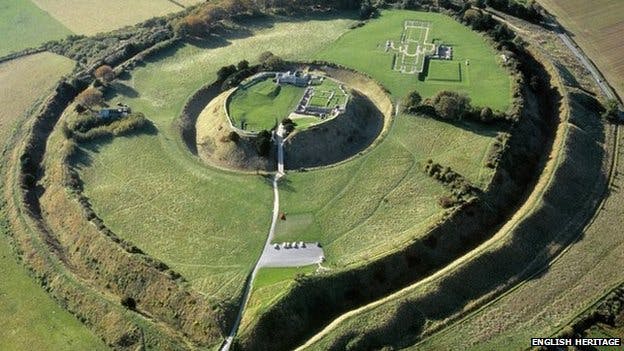 Students from the University of Southampton spent the summer on site

OLD SARUM was the location of the original Salisbury, combining a royal castle and cathedral within an Iron Age fortification. Its ecclesiastical power waned during the 1220s when a new cathedral was built in New Sarum (present day Salisbury) and Henry VIII ended the castle’s use in 1514. For 150 years it was a major centre of government but its influence declined during the 13th Century as New Sarum flourished. The Romans, Normans and Saxons have all left their mark there

It was originally an Iron Age fort, established around 400 BC, and occupied by the Romans after the conquest of Britain in AD 43.

This latest survey of the site was carried out by the University of Southampton and concentrated on the inner and outer baileys of what would have been the fort. Other structures plotted on the plan include residential areas and industrial features such as kilns or furnaces.

Archaeologists and historians have known for centuries that there was a medieval city at Old Sarum, but until now there has been no proper plan of the site. The survey shows where individual buildings are located and from this we can piece together a detailed picture of the urban plan within the city walls.”The plan shows for the first time just how much other activity there was around the castle and cathedral which have long been known. It sets those monuments within the context of a bustling, vibrant town established shortly after the Norman conquest.

Where better place to stay to visit this fascinating site than from the luxury and comfort of Coachmans Cottage, Steeple Ashton. Call Penny on +44 (0)1380 870764 for booking information.