Top Tourist Attractions, Jane Austens City of Bath Jane Austen has helped make Bath a top tourist destination with many attractions. Bath is one of Britain’s finest small cities, famous for the 2,000 year-old Roman baths, but equally well known for the perfect honey-coloured Georgian houses made famous by Jane Austin in her novels.

The City of Bath. Today around 500 of the city’s buildings are considered of historical or architectural importance. So important that Bath was granted World Heritage Site status in 1987, one of only a handful of such locations in the UK. Bath lies in the Avon Valley between the Cotswolds and the Mendip Hills, only a short journey from Coachmans Cottage, Steeple Ashton.

Read on for the Top Tourist Attractions in Jane Austen Bath.

The Romans built the city’s famous Roman Baths and Temple of Sulis Minerva in 75 BC around the largest of the city’s three hot springs. The hot spring water contains 43 different minerals, gushes from a depth of nearly 10,000ft at a rate of 275,000 gallons a day, and is a constant 46.5°C.

Voted Britain’s most romantic buildings, the award-winning Roman Baths and Temple are among the finest examples of Roman architecture remaining in England. Many artifacts, including altar stones and exquisite mosaics, are on display in the museum or around the Great Bath itself.

If you are tempted to take a dip in these ancient waters, see the Thermae Bath Spa packages available through the Roman Baths website. 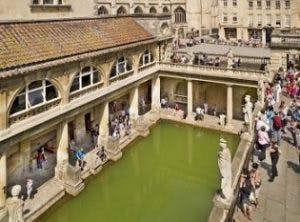 Exploring the perfectly preserved Georgian architecture in Bath is actually equal 1st best excuse to visit! Start your adventure at the Building of Bath Collection. This museum demonstrates how classical design influenced the city’s buildings, and is also home of the incredibly detailed Bath Model of the historic city centre.

Explore Bath’s splendid streets, head for the northwest part of the city where many of the best examples are found. Queen Square and Gay Street with their beautifully symmetrical facades dating from the early 18th Century, then on to the Royal Circus, a perfect circle  three stories high with different classical column types on each story. Finally, the famous Royal Crescent, a monumental 200-yard semicircular sweep of townhouses with a uniform, palace-like facade. No.1 Royal Crescent is open to the public providing an insight into what life was like for the wealthy Georgian residents.

Bath Abbey is the Gothic cathedral of the Bishop of Bath and Wells. Founded in 1499 after Bishop Oliver King had a dream of angels climbing up and down ladders to and from heaven. He also heard a voice declaring: “The crown should plant an olive tree and the king shall restore the church.” Interpreted as a sign to rebuild the church on the site that had been used by Christians as a place of worship since 757 AD. The dream was immortalized in stone on the building’s west side. 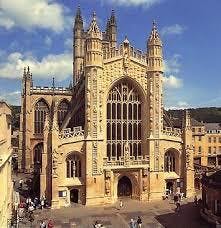 Pulteney Bridge, constructed in 1770 to connect central Bath to undeveloped land on the opposite side of the River Avon, is considered one of the most romantic bridges in the world. Three arches support a variety of quaint little shops, and the bridge opens onto Great Pulteney Street with its beautiful Georgian-era homes.

The Holburne Museum’s excellent collection of art includes paintings by Gainsborough, Reynolds and Stubbs, along with 18th century silver, Wedgwood porcelain, Renaissance bronzes, and early period furniture. Housed in the former home of Sir Thomas Holburne, with a garden café overlooking nearby parkland.

The Fashion Museum in the stunning Assembly Rooms, contains a world-class collection of contemporary and historical clothing including 150 dressed figures and more than 30,000 original items dating from the late 16th century to the present day.

Displays cover a variety of themes such as men’s and women’s wear, day and evening dress annd modern alternative fashion. Reproduction garments are available to try on.

Dating back to 1483, the oldest in Bath, this medieval home is now a living museum and tearoom. Serving delicious “Sally Lunn’s buns” made from the traditional recipe. Located close to the Bath Abbey, excavations demonstrate how the site has been used to refresh travellers since Roman times. 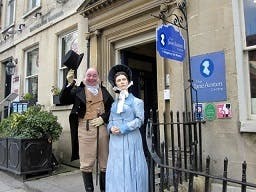 This is a permanent exhibition. Situated in an original Georgian townhouse, it tells the story of Jane’s time in Bath, including the effect that living here had on her and her writing. Jane paid two long visits to Bath towards the end of the eighteenth century, and from 1801 to 1806 Bath was her home. It also provides the backdrop to two of her novels, Northanger Abbey and Persuasion, and features in her other novels and in the collection of letters to her sister.

Situated in 120 stunning acres of countryside, the American Museum in Britain is home to a superb collection of antique quilts, maps and folk art from Colonial times to the Civil War years, with each room depicting a different era. Events include reenactments of battles and events from the rich history of America. 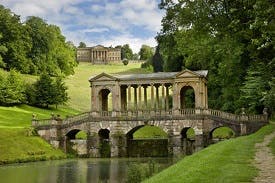 2 miles southeast of Bath, Prior Park has a magnificent colonnaded portico built between 1735 and 1750. Renowned architect John Wood designed the structure and it is a superb example of the Palladian style mansions of the period. Be sure to see the lovely Palladian bridge in the exquisitely landscaped grounds.

Where better to stay than Coachmans Cottage to see the sights of Bath, a 30 minute drive or hop on the train from Trowbridge. See the sights all day and breath in the fresh air and relax on your return to Steeple Ashton.

Thanks to Brian Dearsley for the information